Bitcoin has been a spectacular investment over the years – but its highs have come with some serious lows too. So if you’re crypto-curious but worried about that volatility, this guide will explain how to include bitcoin in your portfolio without the nail-biting drops that can come with holding too much of it.

Rewind back seven years to May 2015 and imagine you’ve got $1000 ready to invest. Let’s look at some investment strategies for both stocks and bitcoin to see how they would have played out.

1. How has bitcoin performed vs US stocks?

Despite the recent drop, US stocks have performed rather well during the last few years. Take the performance of the S&P 500 – an index tracking the 500 largest US companies. If you’d invested $1,000 in the S&P 500 in May 2015, that would be worth $1,851 seven years later. Put another way, you would’ve earned an 85.1% return on your money over that time.

That’s not too shabby, but compared to bitcoin, the results are nowhere near as impressive. If you’d invested that same $1,000 in bitcoin in May 2015, that investment would have morphed into a whopping $126,855.

The chart below compares the growth of each $1,000 investment. As you can see, bitcoin was the clear winner here. 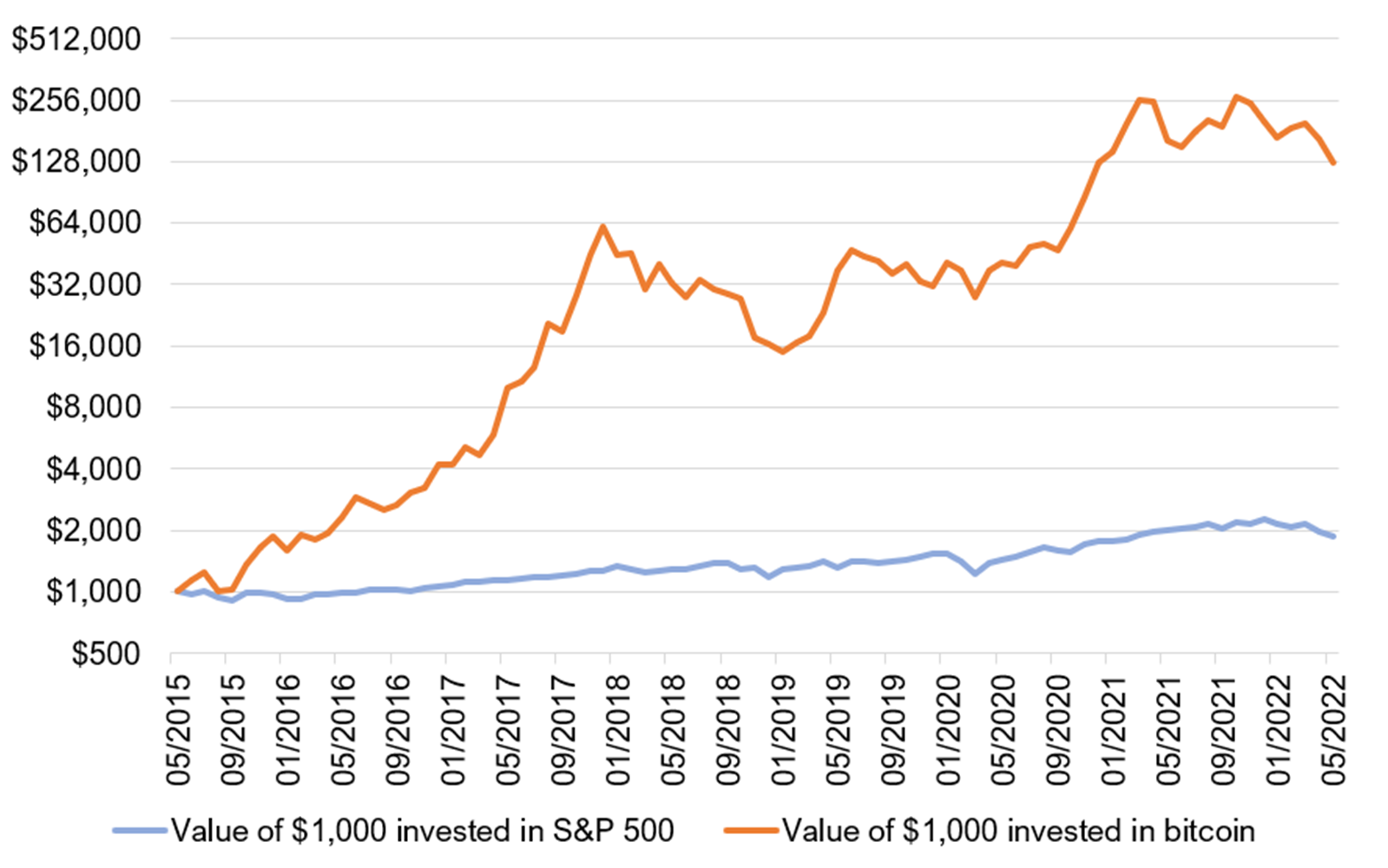 Value of $1,000 invested in the S&P 500 (without dividend reinvestment) vs. bitcoin. Data sourced from Yahoo Finance, based monthly open prices.

But here’s the thing: while bitcoin would have earned you more bang for your buck, you would have endured some massive “drawdowns” along the way. Drawdowns are a measure of the worst-case scenario decline in your portfolio: the difference between the highest point and the lowest point.

Of course, the S&P 500 isn’t as volatile as bitcoin, and its worst drawdown (based on prices at the start of each month) was only around 20%. The chart below compares the drawdowns of each investment. As you can see, holding bitcoin would have been much more of an emotional rollercoaster than holding the S&P 500. 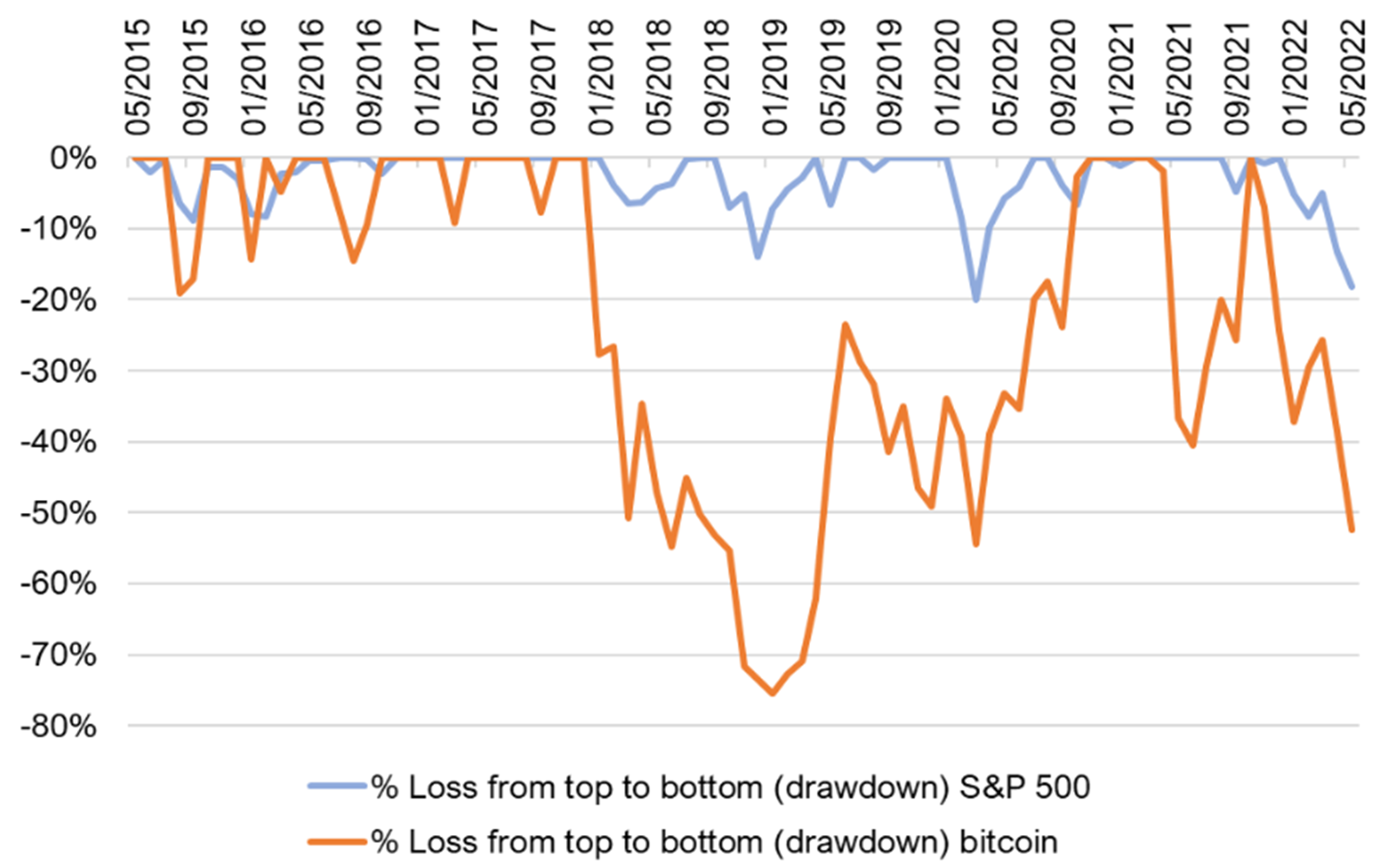 2. What would have happened if you put 5% of your US stock portfolio in bitcoin?

But while that’s a nice return, your worst case drawdown would still have been hard to stomach – at around a 55% decline. So even though adding bitcoin would have boosted your returns, your drawdown risk would have gone up with it. 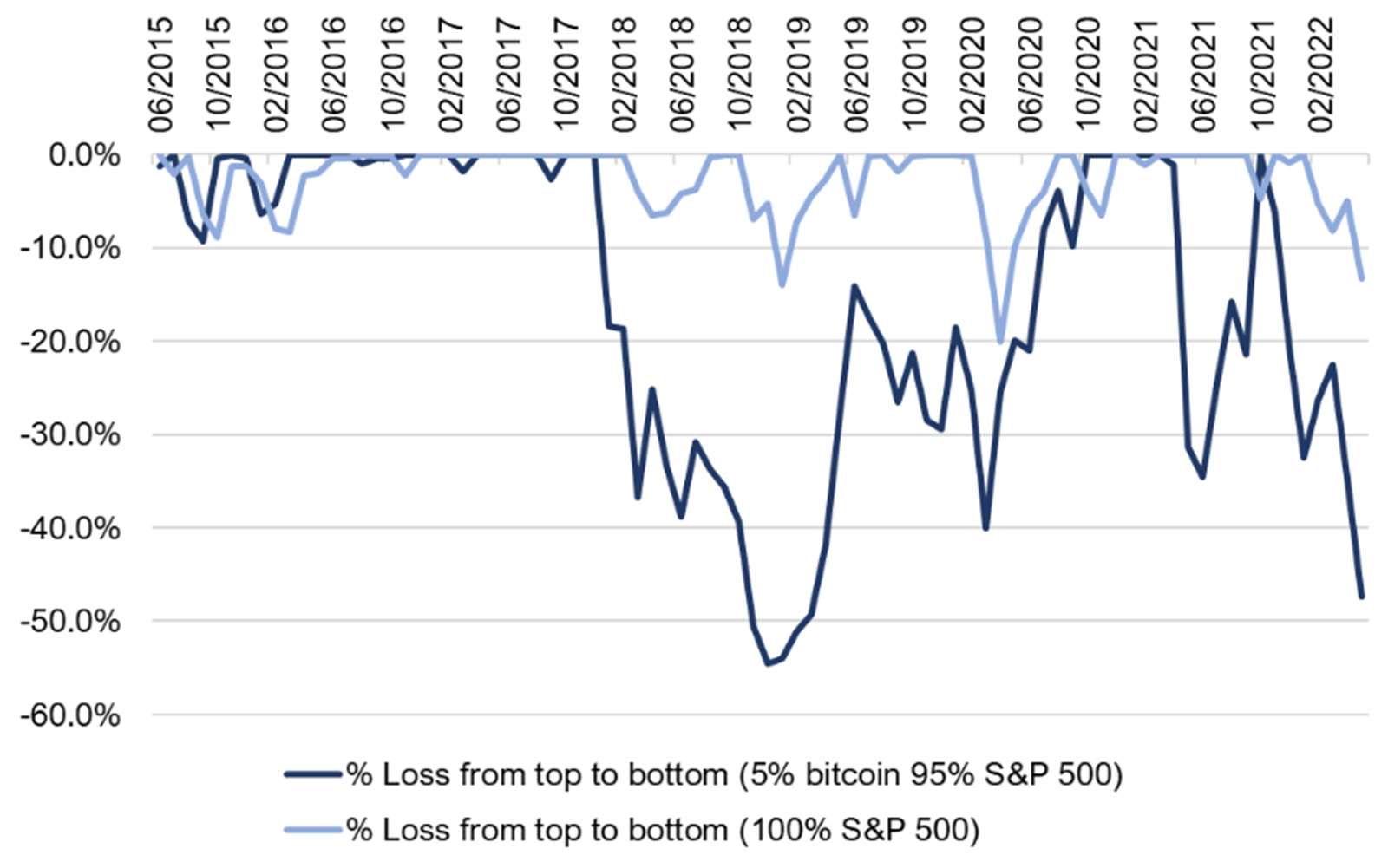 Here’s why you still would’ve had a big drawdown: because bitcoin outperformed the S&P 500 over the period, it would have increased to a much larger percentage of your portfolio as it grew. At one point, almost 90% would have been in bitcoin – so your portfolio would be almost as volatile as just holding the OG crypto on its own. In other words, your portfolio wouldn’t be diversified anymore, and would pretty much follow bitcoin. 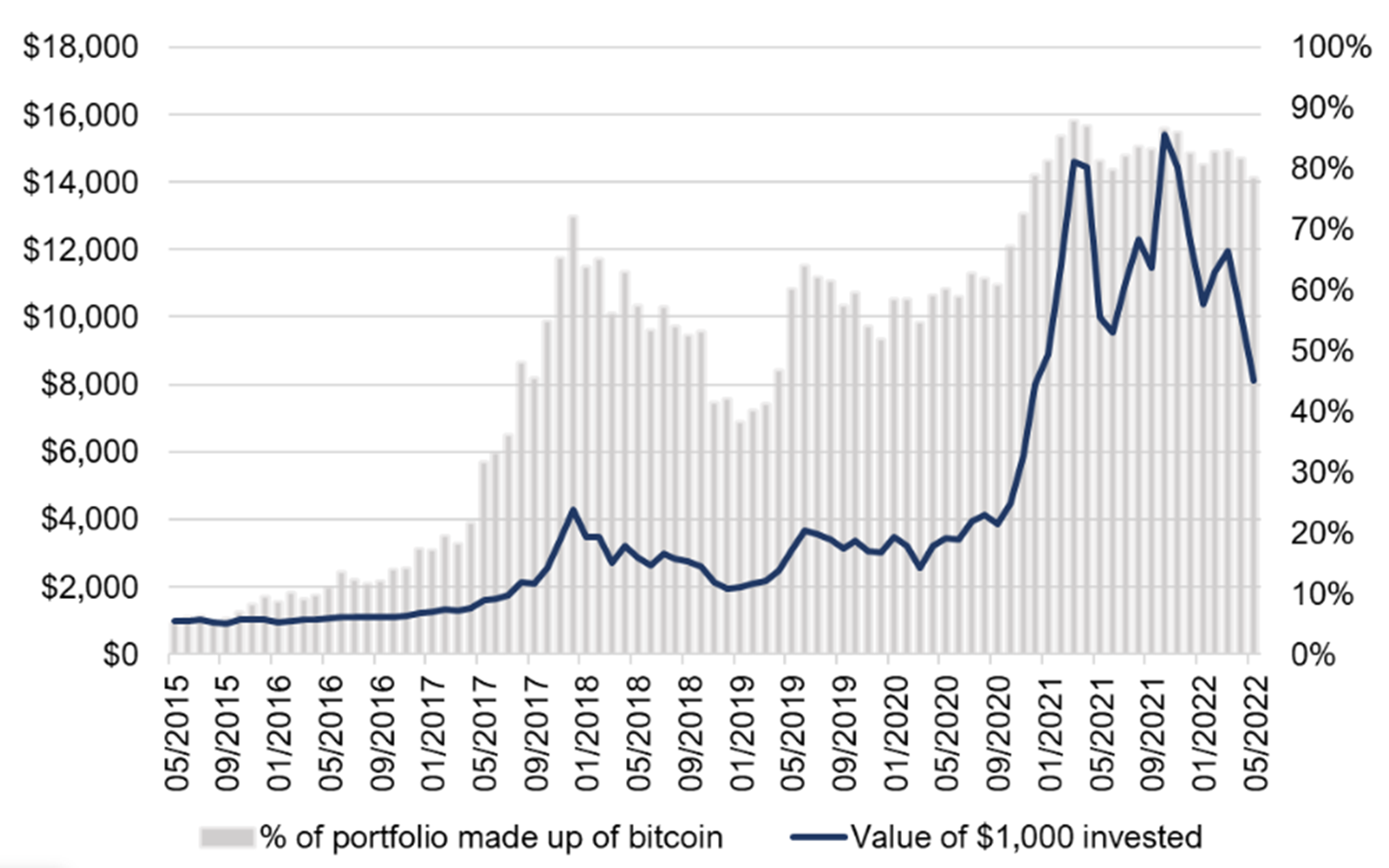 It’s hard to keep up with your investments when they’re spread across different apps. So why not change that? You can get a crystal clear overview of all your assets in Delta’s app, and you can even use it to explore new investment opportunities –including NFTs. See all your investments in one place with Delta.

4. What would have happened if you rebalanced your portfolio?

The problem with holding a high growth asset like bitcoin, is that it can end up taking up too much of your portfolio if it outpaces your other investments. That might mean you earn higher returns over time, but it increases your drawdown risk in a big way.

With this portfolio, your $1,000 would have grown to $2,683 in seven years – beating the pure S&P 500 portfolio by about 45%. This doesn’t account for the small transaction fees of rebalancing, but since you only rebalanced once a year, those wouldn’t impact the results all that much. That’s also why it doesn’t make sense to rebalance too often. 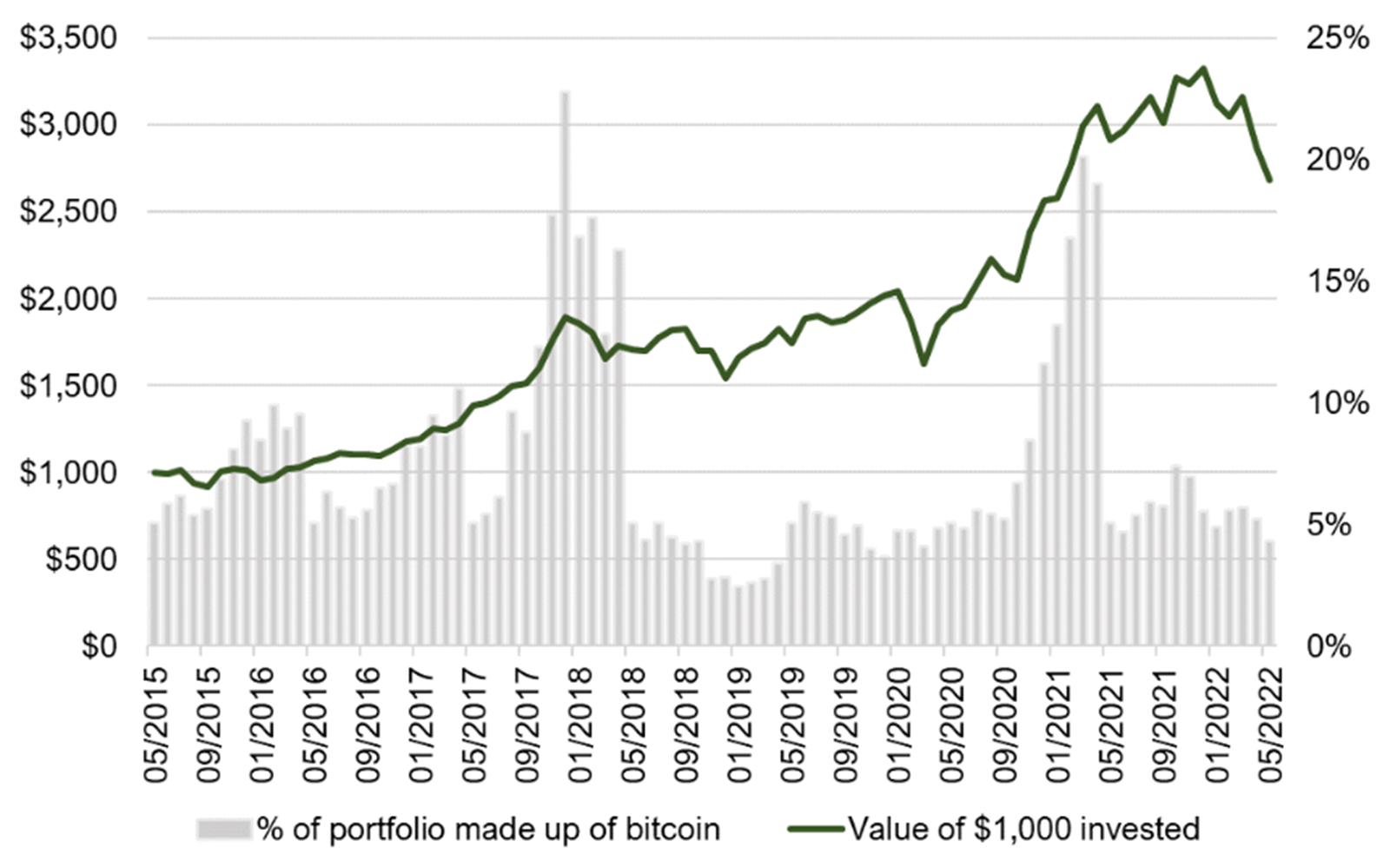 While rebalancing would have lowered your overall return, the journey would have been a lot less bumpy for it. Looking at the drawdown chart below, you can see that a drawdown of around 20% was as bad as things got. In fact, the drawdowns were only slightly worse than if you had kept all your money in the S&P 500 and none in bitcoin. 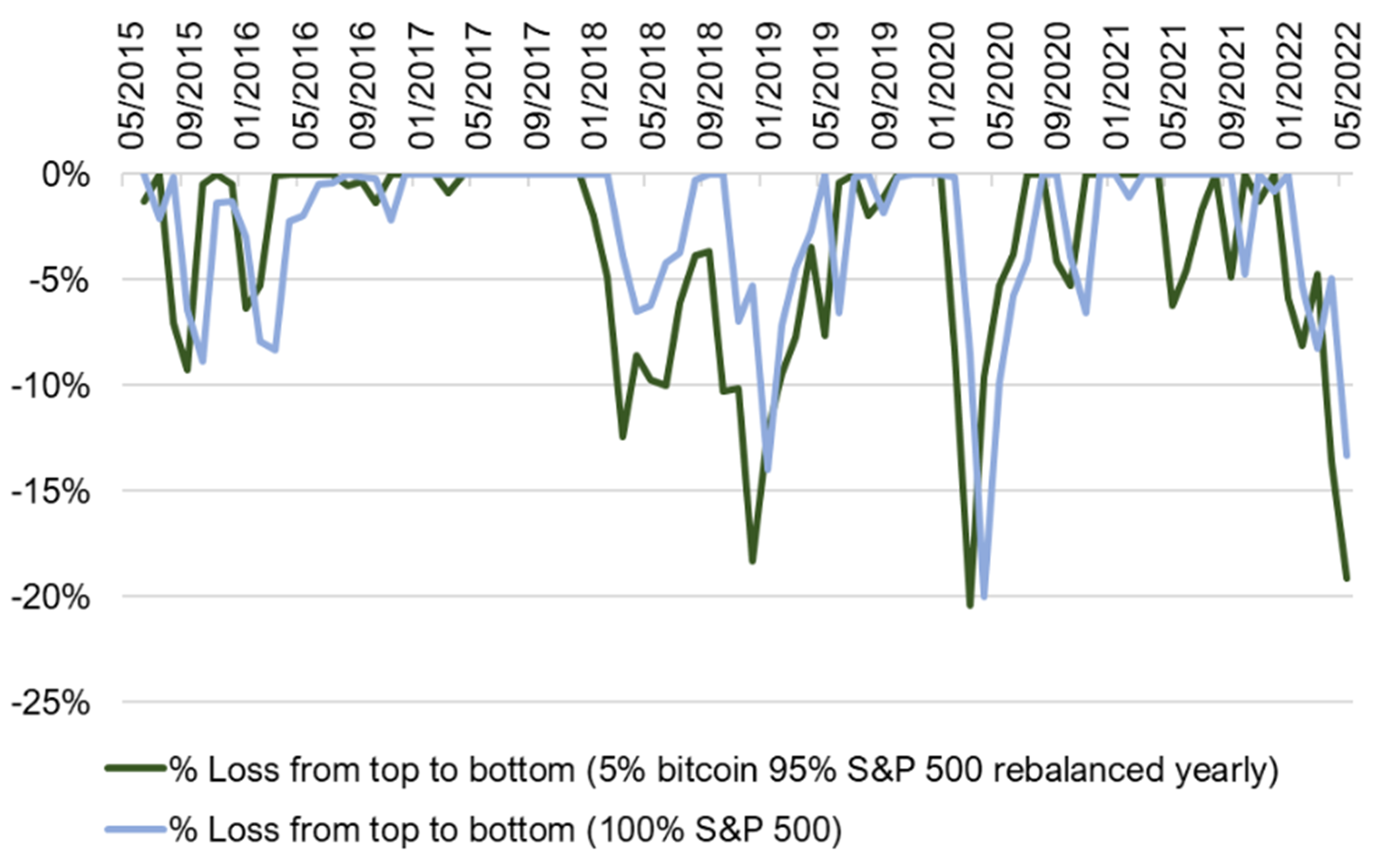 When investing high growth assets, there are two things you can do if they start to over or under perform your other investments. You can either:

Rebalancing will ensure sure you transfer some of your gains from relatively more expensive assets to cheaper ones – this can help smooth your overall returns. Effectively, rebalancing forces you to buy low and sell high.

We’ve used bitcoin and stocks here, but diversification works best when you add more asset classes to the mix. For example, you could add bonds, gold, other cryptoassets, or even NFTs. Different investments go up over time, but they don’t all go up at the same time…

This guide was produced in partnership with Delta Investment Tracker.