Bitcoin may be the OG crypto – but compared to assets like stocks and bonds, it’s still pretty new. And that makes it tricky to value: bitcoin doesn’t generate cashflows or revenues like companies do, so conventional methods aren’t much use.

That said, bitcoin does produce a lot of “on-chain” data. And all that information is public, giving you a number of ways to assess its worth.

If you’re investing in bitcoin, you’ll want to be able to determine whether it’s relatively cheap or expensive. So, here are five different ways to value bitcoin.

Analysts use the stock-to-flow ratio (S2F) to measure the relative scarcity of finite commodities like gold and silver. You can do the same for bitcoin.

The S2F splits the supply of a commodity into two buckets:

To get the S2F, you just divide the stock by the flow. That value represents the number of years it would take to mine the current supply. In other words, a higher S2F implies the asset is scarcer – and more valuable.

Mining data from blockchain.com puts bitcoin’s current S2F at 57 years. While data from the World Gold Council, for example, gives us a S2F of 58 years for gold. So in S2F terms, gold is slightly scarcer than bitcoin right now.

But that will soon change. The number of new coins awarded to bitcoin miners is cut in half every four years: in 2024, it’ll go from 6.25 per block to 3.125. That’ll reduce the yearly flow, which will drastically increase bitcoin’s S2F.

As more time passes, though, bitcoin’s S2F will increase exponentially. At some point, it’ll be so high that it won’t make sense to use the model to compare bitcoin’s scarcity with that of other assets.

2. Bitcoin as a payments network

That’s the theory behind the network-value-to-transactions ratio (NVT). Using similar logic to the price-to-earnings (P/E) ratio for stocks, the NVT divides bitcoin’s market capitalization by its daily transaction volume. As with the P/E ratio, a lower NVT suggests the investment is trading at a bargain. That’s because the bitcoin price is low relative to the amount of transactions on the network.

But as the chart below shows, that doesn’t always mean it’s time to buy bitcoin. Instead, it’s usually better to focus on the trend of the ratio over time. 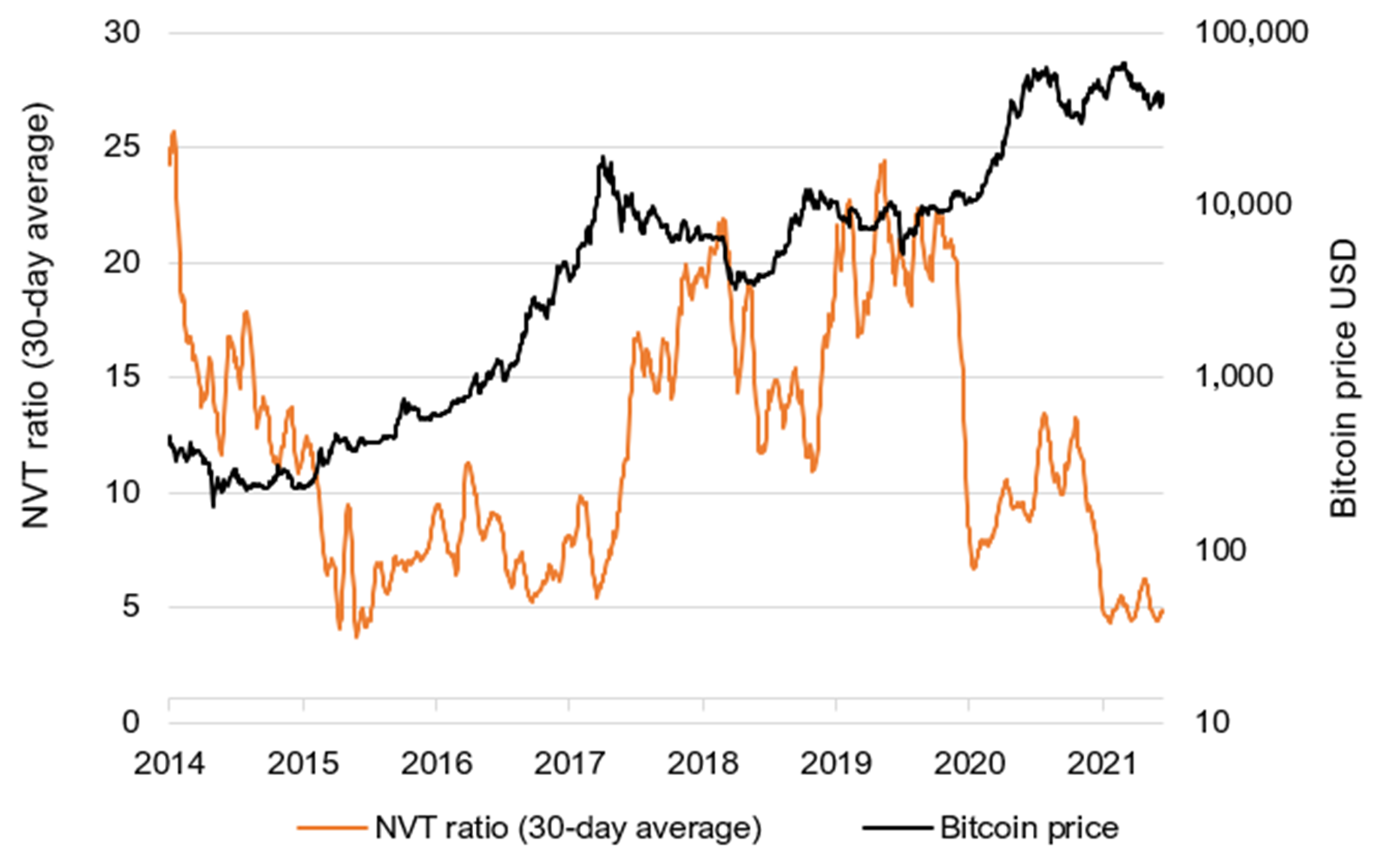 When it comes to your digital investments, safety comes first. Of course, it’s always a bonus when safety comes wrapped in a pretty little package.

Just like the nifty Nano S Plus: Ledger’s latest secure wallet comes with more memory, so you can manage over 5,500 digital assets and install more than 100 apps. Check out Ledger’s Nano S Plus.

4. Bitcoin as a growth stock

Facebook grew its user base from one million users in 2004 to just under three billion today – and its valuation has grown by orders of magnitude in that time. With growth stocks, user acquisition boosts value – and you can apply that logic to bitcoin.

In the chart below, you can see how the number of active bitcoin wallet addresses – that is, those involved in a successful transaction – has risen since 2009. The growth of active addresses shows that more people have been using the bitcoin network, which has boosted its value over time. 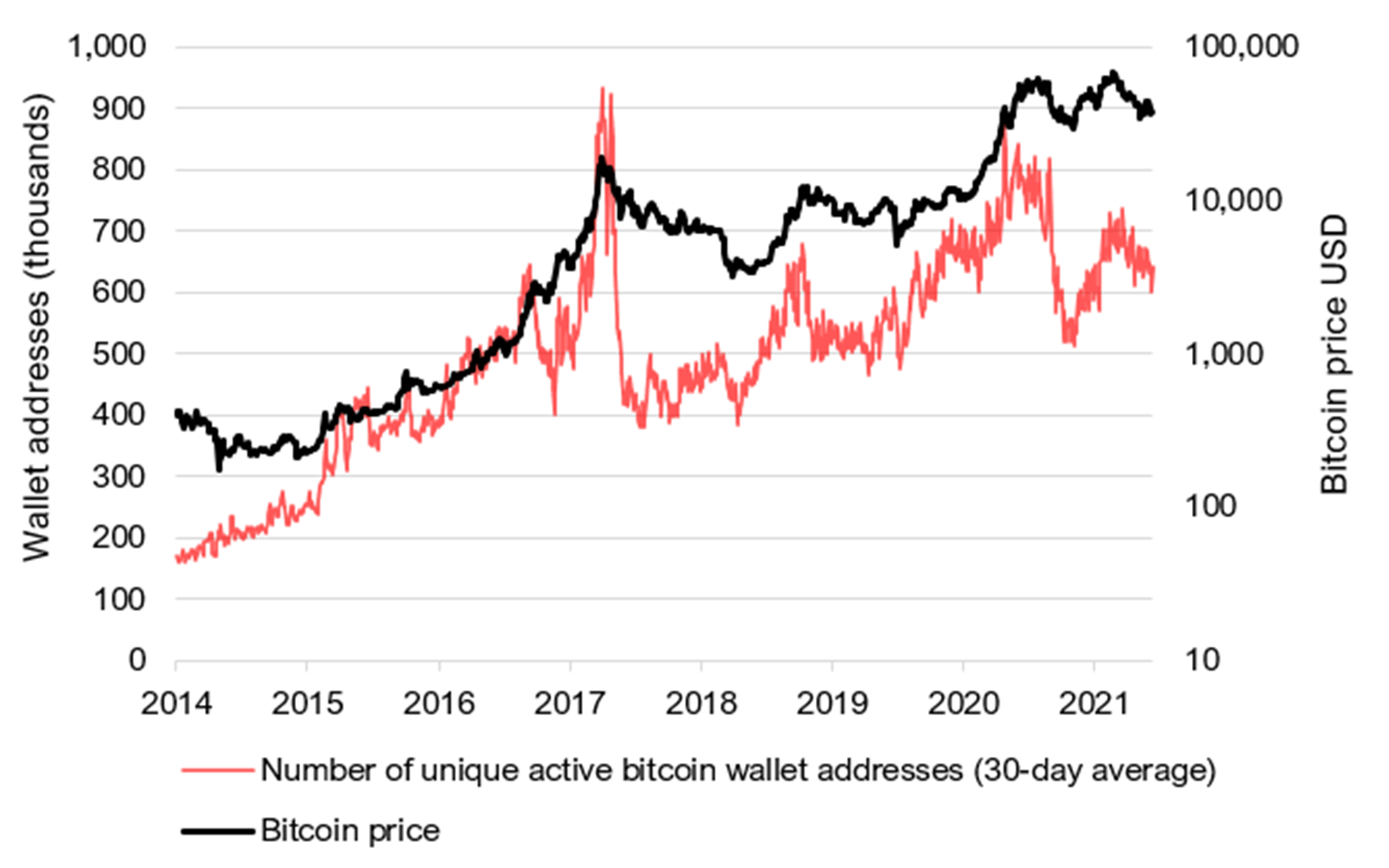 For bitcoin’s value to keep growing, you’ll want to see this trend continue.

The amount of computing power that bitcoin miners contribute to the network at a given point in time is called the hash rate – and this provides useful insight into bitcoin’s value. Higher hash rates mean more competition among bitcoin miners. That makes bitcoin more secure and robust, which adds value to the network.

Bitcoin’s hash rate usually rises with its price: a higher price creates a greater incentive for miners to mine. With this in mind, you can think of bitcoin as cheap when its hash rate is relatively high compared to its price. Case in point: the chart below shows bitcoin’s hash rate climbing steadily from 2018 to 2021. But its price didn’t really get going until late 2020. 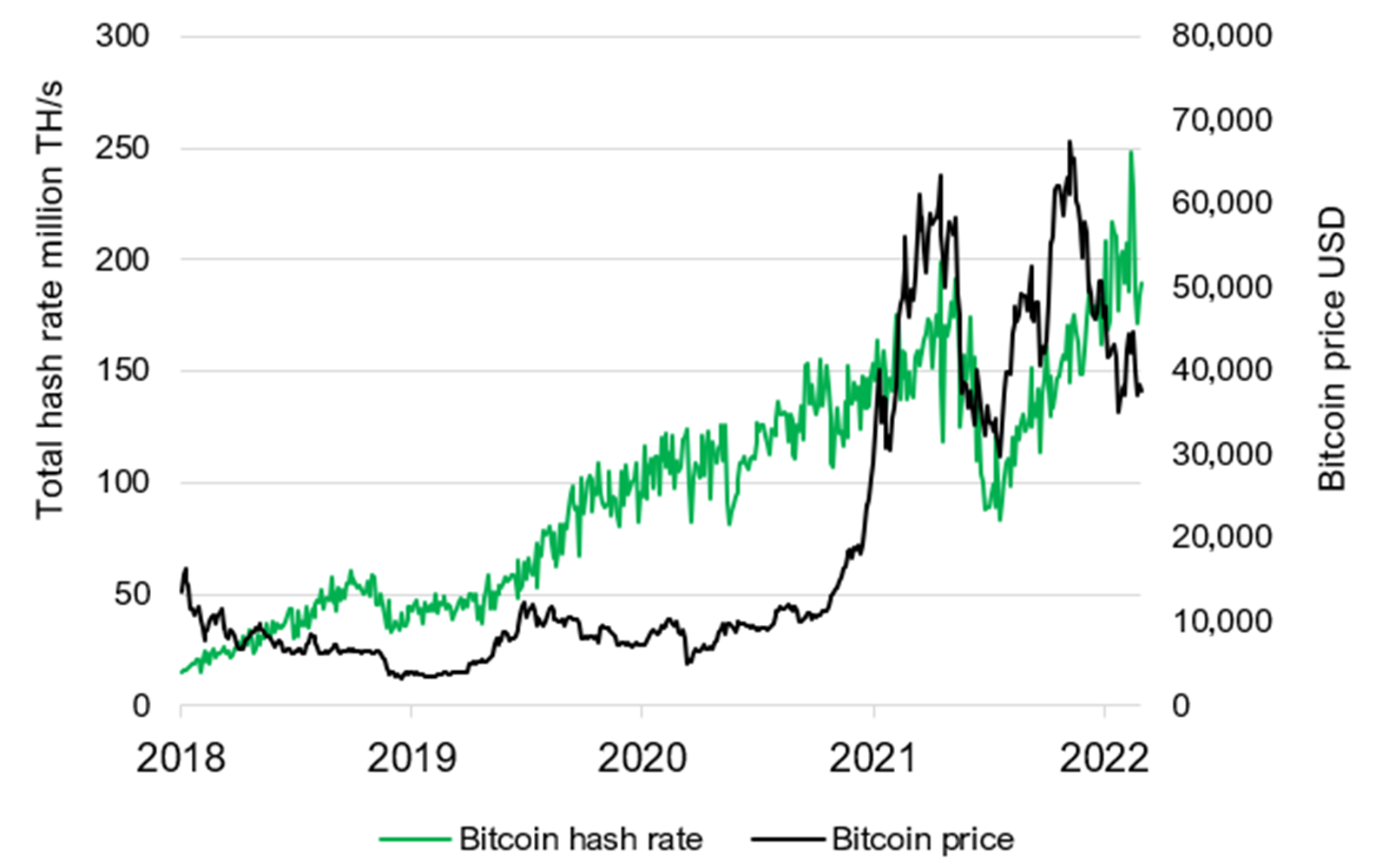 The MVRV method uses on-chain wallet data to estimate the “realized value” of the bitcoin network: the estimated acquisition cost of all bitcoins in existence.

Assume Bob bought one bitcoin for $6,000 in 2018. If that bitcoin remains in the same wallet, we can assume he never sold it. So even if we’d never met Bob, we could infer from the blockchain that the cost of his bitcoin was $6,000. And with that information, we could also say the realized value of the bitcoin network increased by $6,000.

But what if Bob moved his bitcoin to another wallet in 2020, when the bitcoin price was $10,000? Perhaps he sold it to Alice for that amount. At this point, the realized value of the coin becomes $10,000: the estimated price someone last paid for it.

Of course, Bob might’ve just moved his bitcoin to another wallet of his own. In this case, the realized value would still change according to the bitcoin price when he moved it – so realized value is only a best estimation of acquisition cost.

To get the MVRV ratio, you divide the market value by the realized value.

Per the chart below, large upward spikes in the MVRV have coincided with market tops, while values less than one have presented long-term buying opportunities. 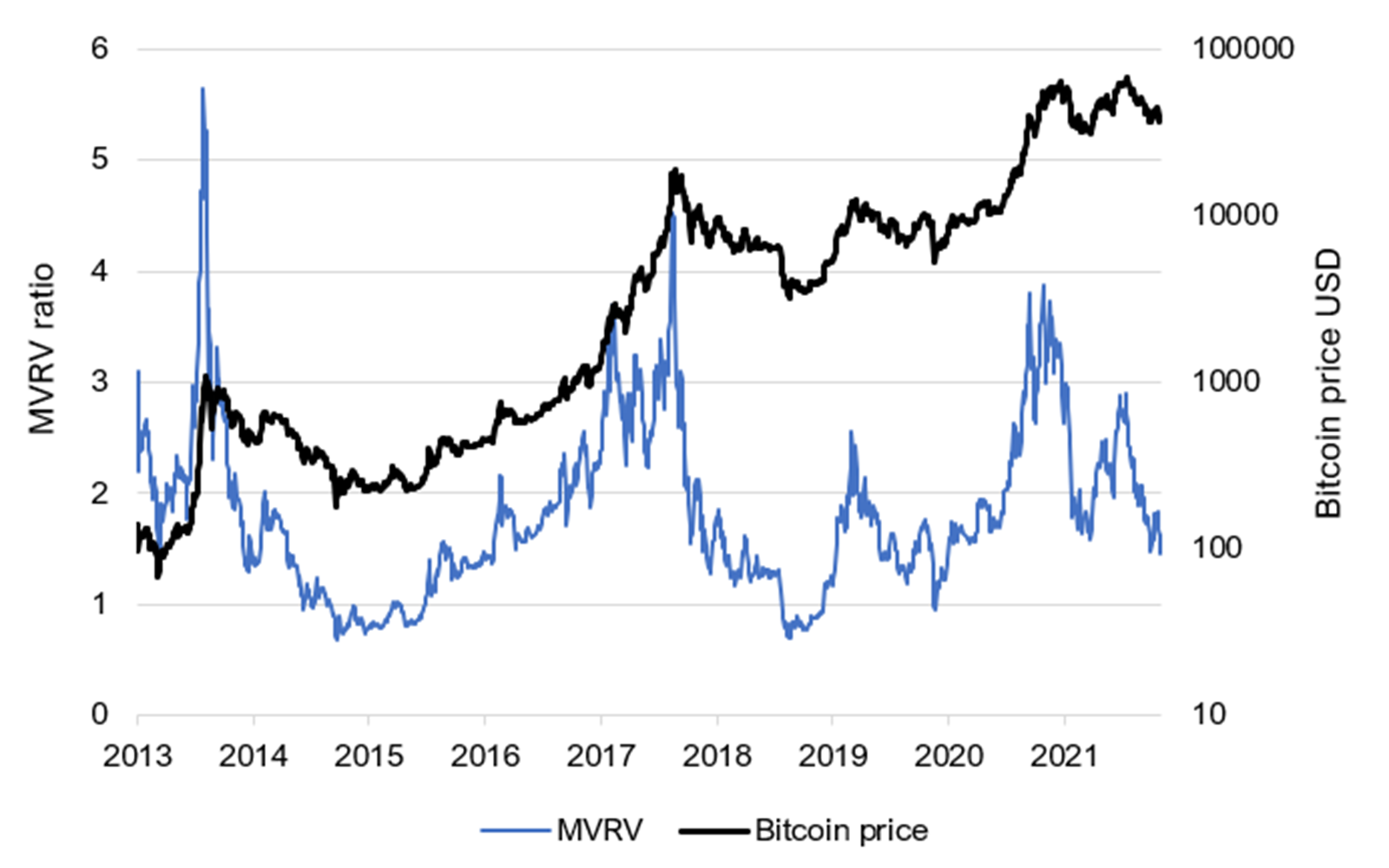 The blockchain leaves you many clues on how to value bitcoin. And while not every possible method is covered here, the five that are should give you some idea of the power of on-chain data.

Regardless of which method you use, it’s important to analyze your valuation against the current price or market capitalization of bitcoin. With stocks and bitcoin alike, buying good fundamentals at discounted prices is a recipe for long-term success.

This guide was produced in partnership with Ledger.