It’s as easy to say “maintain good investing habits” as it is to say “eat vegetables and work out regularly”. But simply saying doesn’t make it so. It’s perhaps easier to pick up good habits, whether investing or in the gym, if you’re aware of the downsides of not doing so.

So in this guide, we’ll look at some of the biggest mistakes your bad investing habits can lead you into making – and dive into one really good habit that could revolutionize your investing success.

For most of the 20th century, mainstream economists taught that markets are what they called “efficient” – that prices of stocks and bonds reflect all the information that’s available. And that market movements were down to human beings processing all this information rationally and therefore making rational decisions.

In this perfect model, it’s theoretically impossible for an investor to beat the market consistently – any gains over and above the wider climb in prices of stocks or bonds would be purely luck.

More recently, though, a whole new scientific area looking at irrationality has emerged. A field known as behavioral finance has grown up at the intersection of economics and psychology – and has become an increasingly popular way to demonstrate humans’ irrational actions and how they can feed through to markets.

It’s still a controversial field, but it’s worth being aware of because if you understand how and why you act irrationally, you can take countermeasures and hopefully make better decisions. What’s more, you can take it one step further and look at ways to profit from the irrationalities of others.

So let’s dive into some of the cornerstones of behavioral finance and see how you can use them to root out any bad investing habits you might have.

Heuristics is a fancy word to describe the mental shortcuts we all take. For instance, we tend to quickly draw cause-and-effect conclusions from limited data, and can be easily primed to under- or overestimate the likelihood of an event happening. Experiments have shown that we massively increase our estimate of the chances of a train crashing if we’ve just seen footage of a crash on the news.

These totally understandable but not very rational mental tropes can hinder your investing decisions by making you biased, leading you to jump to incorrect conclusions.

Here’s an example from the 2011 book Thinking, Fast and Slow by Daniel Kahneman. Imagine two investors: Sarah and Kai.

When asked who feels greater regret, 92% of people say Sarah. While the two situations are objectively the same in terms of financial outcomes, people experience greater regret from performing an action than from remaining inactive.

And that could help explain why investors don’t cut their clear and obvious losses, or indeed why some people struggle to begin investing at all.

If you find yourself making an impulse purchase because something is discounted, you’re probably experiencing an effect known as anchoring – where your mind fixates on the original price and adjusts from there.

It helps explain why discounts can be so effective at driving sales: your brain sees the item at the initial price, and automatically sees everything else as a bargain. Keep that in mind when buying stocks, for example, that appear “cheap” having fallen significantly.

Confirmation bias is relatively common: here’s how it works. When you hold a certain viewpoint or have an idea, you’re more likely to notice evidence that supports it – and discount evidence to the contrary. It can be tricky to avoid when it comes to investing: when coming up with an investment thesis, be sure to spend time looking for evidence that might disprove your ideas.

Herd mentality – a.k.a. bandwagon bias – is the desire to follow popular opinion. It’s difficult to escape: most investors end up doing it, and it’s one of the contributing factors to markets going through boom and bust cycles.

Everyone dislikes losing and enjoys winning. And, in fact, people hate losing more than they love winning. That’s loss aversion bias in a nutshell, and it can affect every single investment decision you make.

One common way that loss aversion manifests itself is a reluctance to let go of bad decisions. For instance, you might have bought into a stock that keeps dropping but refuse to cut your losses. Instead, you might be harboring unrealistic hopes of a miraculous recovery; or perhaps you’re just unwilling to face the loss.

2. How to counter behavioral biases

Nudging involves making small changes to your environment that can have a significant impact on your overall behavior.

As far as investment-related nudges go, there are a few you can put in place to help improve your investment decisions and decrease the likelihood of making rash and poor choices.

A trading journal is one of the most simple yet effective things you can do. Moving ideas from your mind to paper can help you avoid a lot of irrationalities.

For example, if you note down the maximum amount you’re willing to lose on any investment, it’s easier to hold yourself to account if things go sour. And if you record your reasons for buying into an investment before you hit the button, it will help you decide whether you’ve thoroughly thought it through or if you’re merely taking a punt based on impulse.

It’s also worth checking on your investments infrequently – say once a quarter instead of every few days. More frequent checking-in might also cause you to fruitlessly “churn” your investments – potentially selling those that are doing well prematurely or racking up trading fees with your broker.

But there’s one thing you can do that makes a big difference to your investing success if you can make it into a regular habit, and we’ll get into what that is next…

Portfolio rebalancing is a major way to help offset any negative habits you might have, even if it might seem counterintuitive at first. We’ll explain…

Let’s say a late aunt leaves you with an extra $1,000 available to invest. You decide to put 90% of it in stocks and 10% in bitcoin: perhaps the risks mean you don’t want to bet all your money on cryptocurrencies, but you think it’s worth having some exposure…

But now your portfolio is now predominantly made up of bitcoin. So to bring your risk back down to your target level, you now need to rebalance. That means selling most of your bitcoin, leaving you with $200 worth – and using the proceeds from the sale to buy another $900 of stocks. You’re back to a 90/10 stock/crypto split, and your portfolio reflects the risk you’re actually comfortable with.

Doesn’t this mean selling the investments that are doing the best?

Yes and that’s because you’re choosing not to bet on individual assets, but to trust your asset allocation instead. It’s slightly counterintuitive, sure, but regularly rebalancing, you’re deliberately not taking a view on the success of any one investment. And that helps take the emotion out of investing and therefore better manage your risk.

Some evidence suggests rebalancing is good for your returns, too. If, over the long run, your different investments’ gains average out – so bitcoin falls and stocks rise – then by cashing out your crypto once you’ve made a profit and putting that money in stocks, you should see better returns than if you’d just left your investments untouched.

How often should I rebalance?

Analysis from East West Investment Management shows that rebalancing on a quarterly basis might be best. Its dummy portfolio of Canadian stocks and bonds, split 60/40, performed best when it was rebalanced every three months – but the company found that any rebalancing is better than none at all. 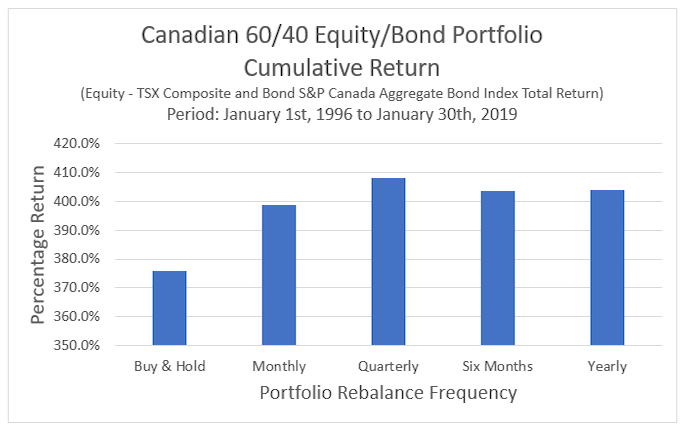 And there you have it. You’re now au fait with some of the behavioral traps and bad habits investors fall into so all the better placed to avoid them. And you’re armed with one technique that can revolutionize your investing process. Take both these into account and the stage is set for improving your returns. Best of luck!

This guide was produced in partnership with Freetrade.

Freetrade makes it easy for you to invest commission-free. Its award-winning app makes investing simple for both beginners and experienced investors to invest in US and UK stocks, as well as exchange-traded funds and investment trusts. It also allows you to purchase fractions of shares, meaning you can own a slice of even the most expensive stocks out there. Check it out now and sign up in seconds.