Bitcoiners and gold bugs have one thing in common: they both believe their favorite investment towers above the rest. But in reality, there are good reasons to own both bitcoin and gold. Here’s why mixing the two could spell good news for your portfolio

Influential economist John Maynard Keynes once famously called gold a “barbarous relic”: he argued that gold has no present-day utility and so shouldn’t be worth much. But the fact of the matter is that gold has held its value for thousands of years. Sure, gold’s function has changed since ancient Babylon, where it was used to buy bread. But it’s still considered by many to be the ultimate long-term store of wealth today.

Gold is a “safe haven” asset, which means that it can protect your portfolio in times of turmoil. The chart below shows gold versus the Nasdaq 100 Index over the last 25 years. While gold hasn’t always kept up with the high-flying tech and growth stocks of the Nasdaq, it’s certainly held its ground when those high flyers came tumbling down. 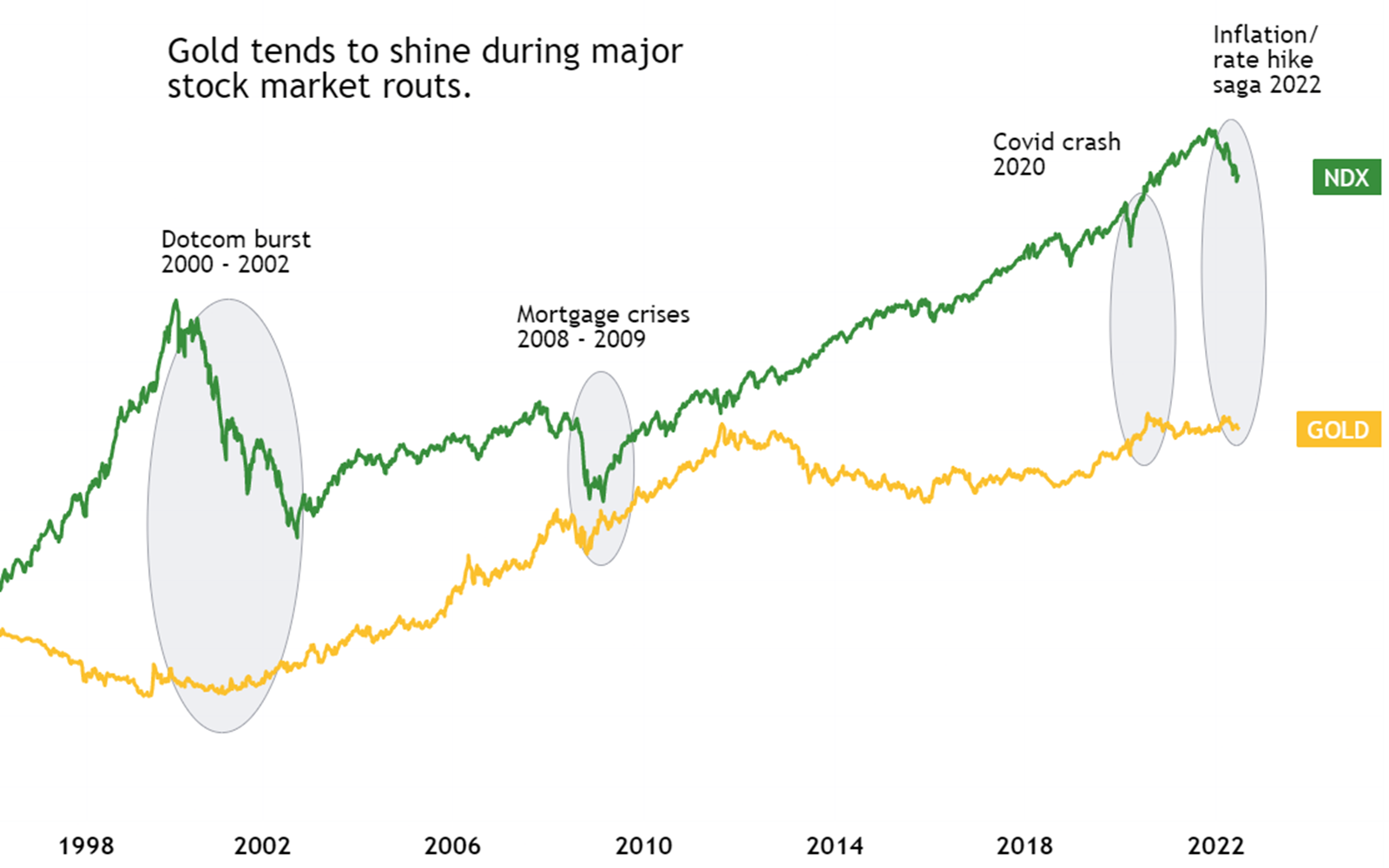 Bitcoin is often called “digital gold” as it shares a few characteristics with the metal. Like gold, bitcoin is scarce – there will only ever be 21 million coins. And despite their vastly different physical properties (or lack thereof), you can mine both bitcoin and gold with heavy machinery.

But unlike gold, bitcoin hasn’t been around very long: the first bitcoin transaction block was processed in January 2009. And since then, bitcoin has behaved more like a high-performance growth stock than a safe haven. It was the fastest ever asset class to go from zero to a trillion dollars in market value, after all.

Bitcoin’s market value has come down since then, though. It’s now sitting at around $400 billion dollars. While gold’s market capitalization – the value of all the gold in the world – is almost $12 trillion at the moment. This suggests that bitcoin might have more upside potential than gold (as it might have more room to grow), but also more volatility (as it takes relatively fewer dollars to move the price up or down).

Bitcoin might seem like the ultimate safe haven to die-hard bitcoin believers right now, but it’s got a lot more to prove for that narrative to catch on in the mainstream. For now, at least, most mainstreet investors buy bitcoin for its growth potential – just as they would a tech stock.

Change lets you trade Bitcoin with zero fees and buy Stocks* without any commission. Heck, you can even buy fractions of gold without friction or hefty fees.

Your new investments won’t be locked away when you buy them, either: you can use your Change Investor Visa Card to pay with crypto, euros, or gold at over 40 million stores around the world.

4. How have gold and bitcoin performed over the last five years? 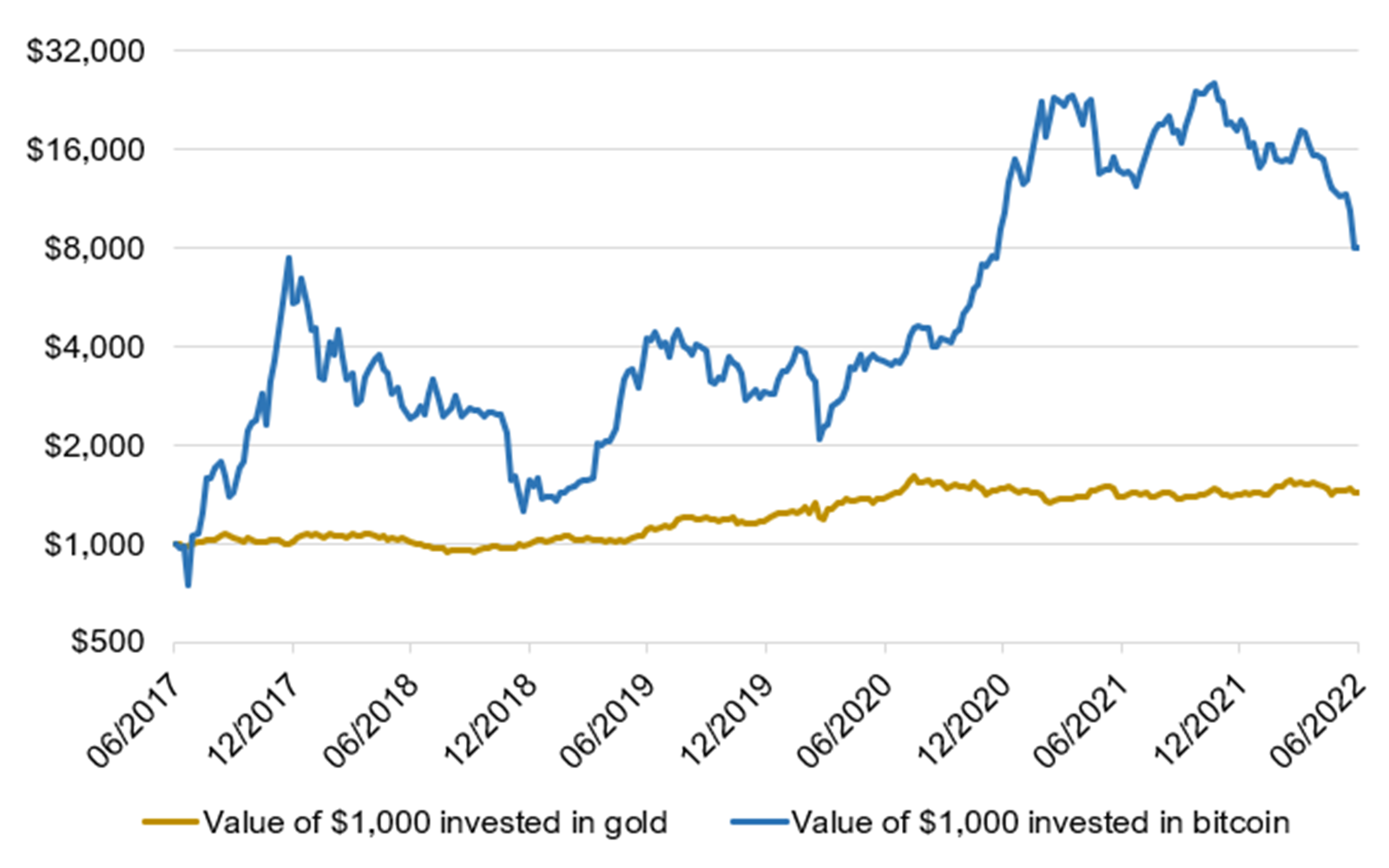 Bitcoin was the faster sprinter, sure, but it’s had wild swings along the way. During those five years, your investment would have seen crushing “drawdowns” in value after each wave of growth.

By December 2017, for example, your $1,000 investment would have skyrocketed to around $7,400. But by January 2019, you’d have seen that drop all the way back down to around $1,300 – a circa 82% drawdown. Of course, you’d still be up 30% on your initial investment, but to sit on your hands and see bitcoin go down like that would not have been easy. And after that drop, your investment would have then needed to go up nearly six times in value to reach its former glory. Not to mention the fact that today, you’d be down about 70% from the last bitcoin top at $69,000.

Gold, on the other hand, was slower and steadier. Your largest drawdown from owning gold over the three years would be just under 17%. On that note, the next chart compares the drawdowns of bitcoin and gold. As you can see, you would’ve had many more sleepless nights owning bitcoin than owning gold. 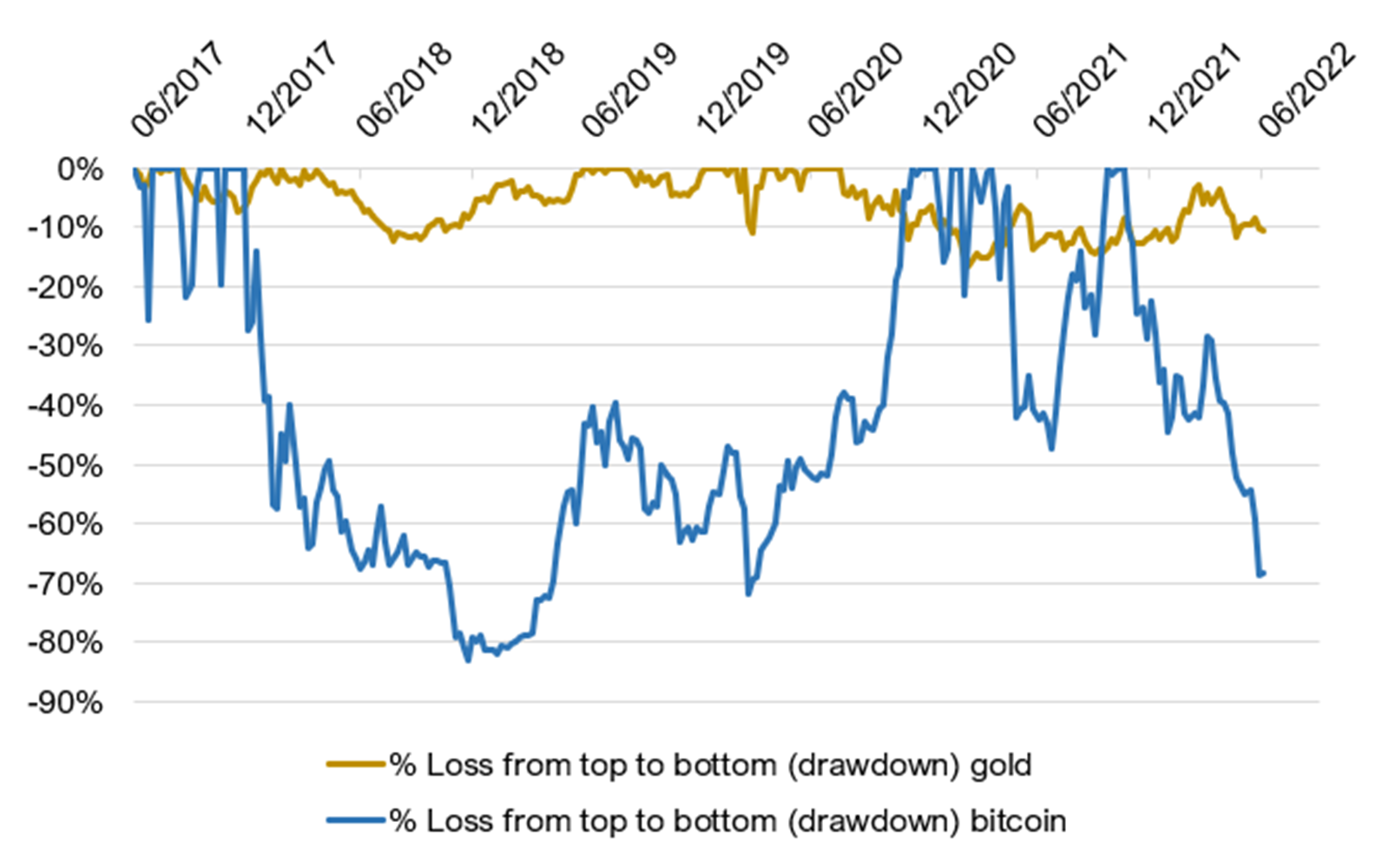 Drawdowns (June 2017 to June 2022). Data sourced from Yahoo Finance, based on weekly prices.

5. What about owning gold and bitcoin together?

Owning both assets together could make a lot of sense: you’d have gold as the safe-haven defender and bitcoin as the high-growth striker.

The next chart shows what would have happened if you took $1,000 and invested it in a portfolio of 90% gold and 10% bitcoin. This would be less risky than a 50/50 split, and might be more realistic given the huge difference in drawdowns. We’re assuming that you “rebalanced” the portfolio – by selling the better performing asset and buying the worse performing one – back to its original split each year. This would have ironed out a lot of the impact of bitcoin’s volatility. 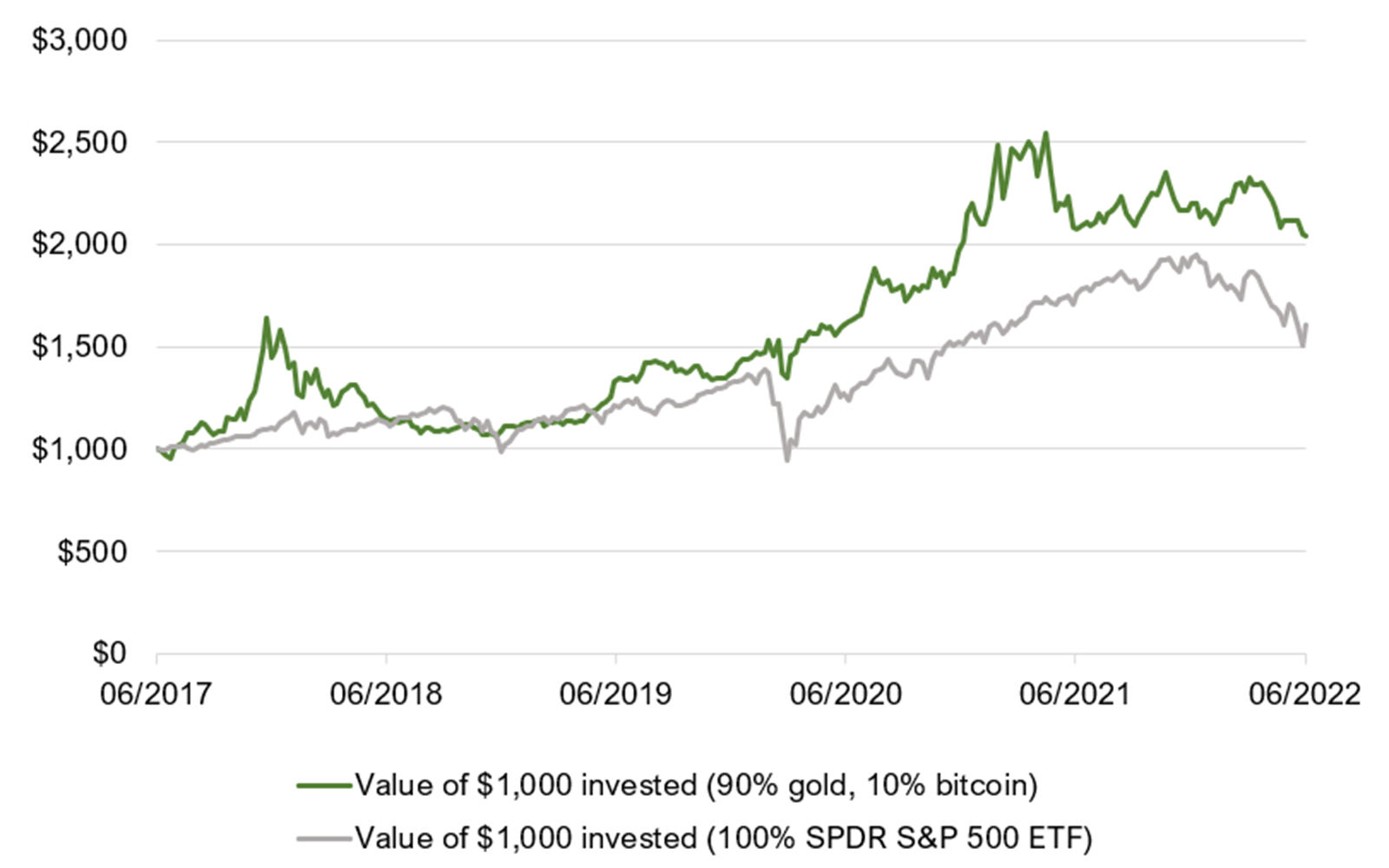 And since you only had 10% invested in bitcoin, your drawdowns wouldn’t have been too nerve-racking either. The next chart compares those drawdowns with that of the SPY: 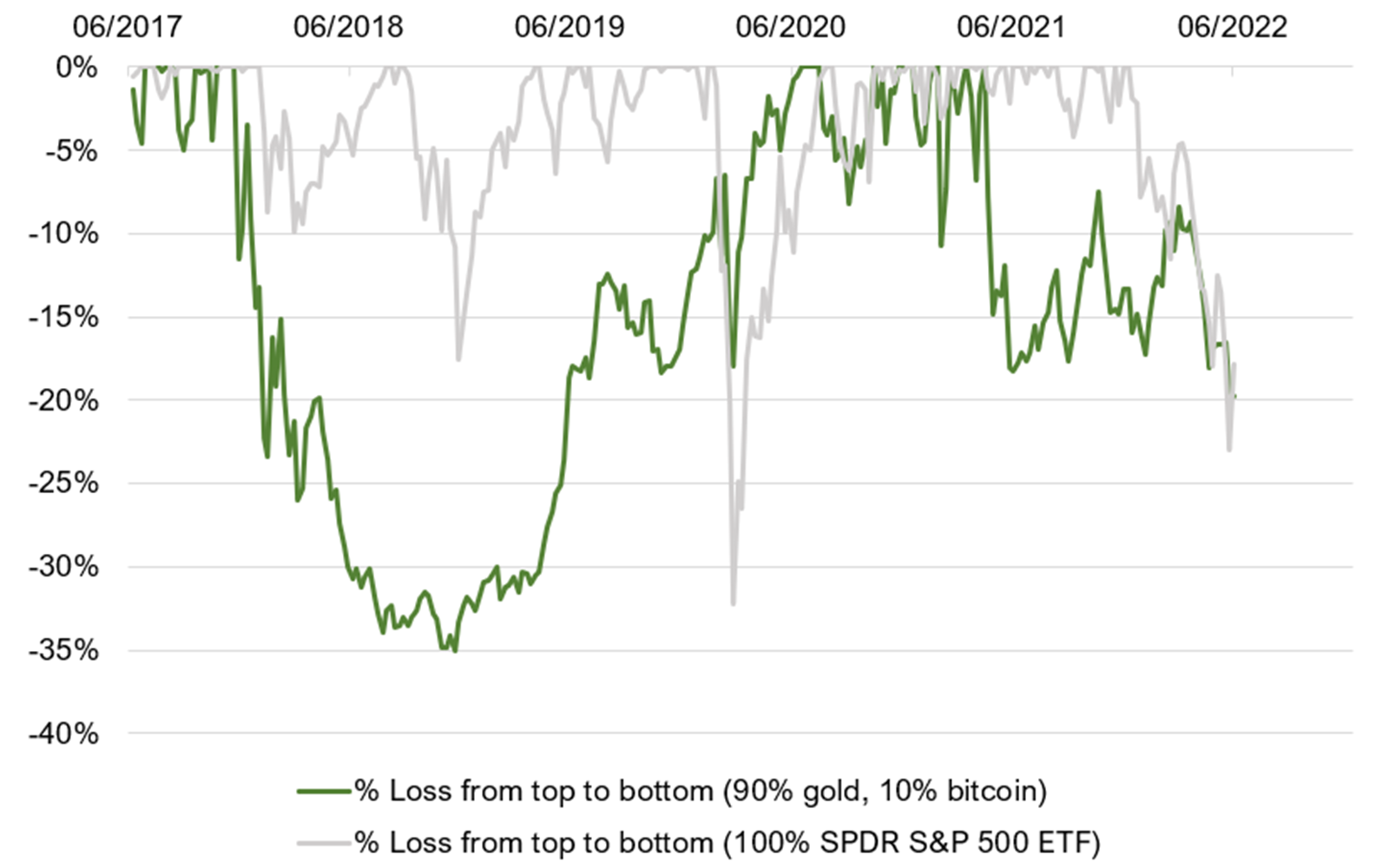 Drawdowns (June 2017 to June 2022). Data sourced from Yahoo Finance, based on weekly prices.

As you can see, your portfolio’s biggest drawdown wouldn’t have been far off the SPY’s – quite different from holding just bitcoin alone.

DeFi vs CeFi in crypto: which is better for you?

Your guide to staking: how to make your crypto work for you